November 9, 2021: The Japan Aerospace Exploration Agency (JAXA), today launched its Epsilon Rocket No. 5 rocket with a payload consisting of the Innovative Satellite Technology Demonstration No. 2, including Sony’s Spresense microcontroller board. The delayed launch happened on the morning of November 9 from the Uchinoura Space Center, Japan. You can see footage of the launch in the JAXA video, below:

Sony is taking part in exploratory space missions with JAXA to test how Spresense can be used in satellites and other space technology. One small step will be testing in earth orbit, but 2022 could see a “giant leap” with a lunar landing involving a transformable robot on the Moon’s surface.

Spresense: a microcontroller fit for the demands of space

Space travel and exploration have been in the news in 2021. It even has a name: the “New Space movement”, and Sony has its part to play with Spresense.

The New Space movement is about commercial collaboration and international effort. It will be essential for missions to use or develop existing technology, Commercial, Off-The-Shelf (COTS) components, and wherever possible, small, lightweight components that use little power. 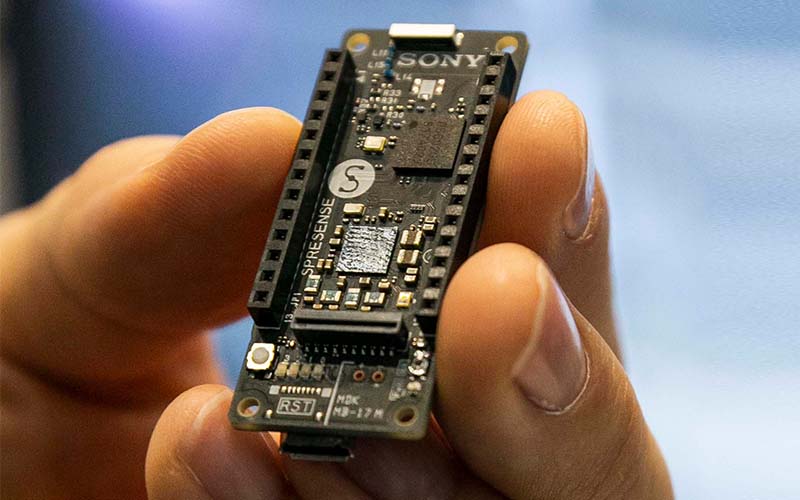 The Spresense microcontroller certainly fits the bill for a COTS component on a New Space movement project. Spresense is compact, power-saving, and high-performance. The main board is about 21mm x 50mm and weighs about 6g (at sea level on Earth). This means, you get a good deal of computing power while only adding a tiny amount to the payload at take-off. The potential of this is huge savings in fuel costs and more space for other equipment in space missions. And when your spacecraft relies on power generated from solar power, low power consumption is very attractive.

When Sony was invited by JAXA, the Japanese space exploration agency, to take part in the Innovative Satellite Technology Demonstration No. 2, a program to provide technology for space missions, Spresense was put forward. The aim is for Spresense to demonstrate its capabilities in a real satellite situation and show how to take advantage of its technology in the most challenging – and remote situations.

Mr. Yoshinori Oota of Sony Semiconductor Solutions Corporation, the image-sensing arm of Sony that produces Spresense, and Mr. Masaharu Nagata of Sony Group Corporation, in a recent conversation with JAXA, revealed some ambitions for Spresense in space. Their approach is “utilization of sensing technology to prevent inconvenient situations.”

Mr Nagata named one such “inconvenient situation” that Spresense could help with is the unintentional destruction of nature, such as logging forests to secure farmland. Mr Nagata is quoted as saying, “We precisely sense farmland and crops, and then follow the events that are occurring now. We are researching a mechanism that enables efficient and stable harvesting from the minimum necessary agricultural land by detecting signs of what will happen in Japan and preventing the situation from worsening.” Mr Nagata also said, “We would like to contribute to the protection of the global environment by developing various sensing systems using Spresense.”

The satellite demonstration of Spresense will go beyond the basic requirements of low size and power consumption. Tests will also verify position estimation and attitude estimation technology that combines Spresense with MEMS IMU (inertial measurement unit) and GNSS (satellite positioning system). Spresense has DNN (Deep Neural Network) capability for machine learning. This can be used for data acquisition and advanced data analysis. Another Spresense capability is its edge AI processing. Spresense will be used to perform image processing using images taken by a camera in space.

Testing the Spresense board in readiness for space travel

Equipment used in space needs to be reliable – you can’t just send an engineer round if something goes wrong. Spresense was designed for IoT use, so reliability is already part of that equation. But in space, there are other environmental challenges: cosmic and solar radiation, atomic oxygen, as well as vacuum and launch conditions. From June 2020, Spresense started a series of tests to show its suitability for the rigours of space, including vibration and shock testing, and proton irradiation.

Vibration and shock testing verifies that Spresense can withstand a rocket launch. The Spresense main board was subjected to low and high-frequency tests as well as shock tests at different frequencies. In the low-frequency transient test at 5-100Hz, the board experienced forces of up to 20G. The high-frequency tests involved a range of frequencies from 10 – 2kHz in a power spectrum density range of 0.1 – 2.0 G2/Hz, with forces equivalent to between 82 and 336G.

The thermal vacuum tests were over temperature range -20C – 60C cycled at +/- 2C per minute, at a pressure of 1.33 mPa. The Spresense board showed no appearance damage or malfunction during or after the tests.

In the proton irradiation tests, the Spresense board was subjected to proton bombardment (as though from a particle accelerator) at energies ranging between 10 and 70MeV, for durations of between 95 and 166 minutes, at fluxes of up to 1.742 x 107 p/cm2/s. That is a lot of protons. The results showed no significant ill effects other than requiring power-on resets, but mean that the board needs an aluminum shield to protect from radiation in a sun-synchronous orbit of 500km above the Earth.

Sony is also contributing to another JAXA mission in 2022, one that will take a transformable robot to the moon. The mission is to gather information about the lunar surface with an innovative project to acquire data using a transformable robot. The mission is very much part of the New Space movement, making use of COTS equipment. Sony’s contribution is the control system for the robot that uses Spresense as a core component. Again, the compact size of Spresense and very low power consumption are required, but it is the ability of Spresense to work with robotics that was the key.

It is hoped that being able to demonstrate the capabilities of Spresense in space will contribute greatly to solving problems back here on Earth.